I now have a Dynamater (Dynamo/Alternator) charging system and a temperature controlled cooling system it would make sense to have instruments to monitor the efficiency of such features. The classic Ruby dashboard has no facilities for this requirement and would look completely out of place if I did add them with extra meters etc. Another solution was required.

I came across this wonderful device from China, it is a 3 functions in one and plugs into a standard cigar lighter 12V socket. 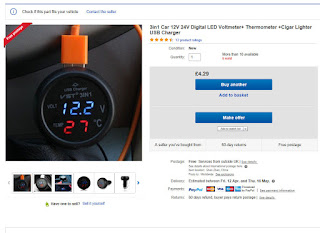 As it turns out I already have a cigar lighter socket (12V outlet) added a couple of years ago to do the Applecross adventure. The temperature sensor is an external thermistor (a resistor that changes impedance with temperature) on a 30mm lead from the unit. If you extend that lead and attach it by araldite to the water system in some way you have a coolant temperature gauge + volt meter that tells you how well the Dynamater is doing and provides a USB connection for charging your phone.


If you want to see a video of this feature

Here is an Index page for the build
Posted by theprisioner at 11:33 No comments:

The Hunts racing seats in my special look the part but due to primitive leaf spring suspension the ride on pot holed public road in Scotland give me a sore back. I decided to get some seat cushions made to measure. I was given a contact called GJ Upholstery in East Preston as a likely contact. 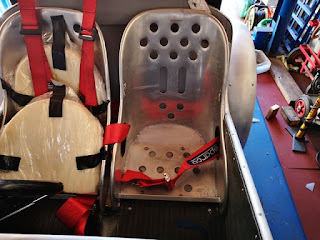 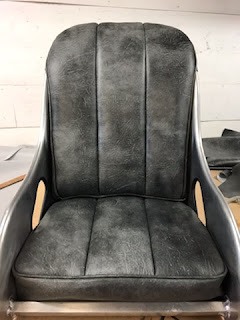 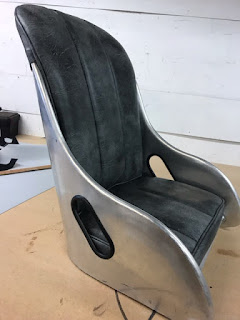 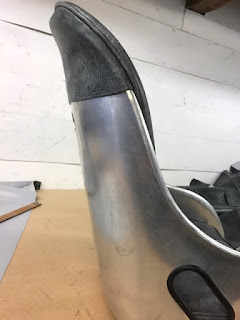 May this be the answer to some longer runs?

Here is an Index page for the build﻿
Posted by theprisioner at 10:01 No comments:

I have been attracted for some time to a Dynamator conversion. I want to run the electric water pump thermostatically which takes a significant current. I also have a race type dry 12V battery.

After taking advice from Ruairidh of Alba Austins in Glasgow I decided to take the plunge, the gears at either end of the Dynamator were fitted from old stock. The reasoning being that only one gear is supplied and of questionable quality.

The conversion is relatively straight forward only the 3 securing bolts, two of which are in a relatively inaccessible place. Great patience is required to remove and reinsert them.

The next part is to attend to the wiring. I found it easier to replace the Lucas Regulator with a 4 way marine terminal block and relabelled the terminals exactly the same as the original regulator. The Yellow wire from the Dynamator (B) can then be shifted to the (A) terminal very easily. The red ignition warning light return (yellow)  can then be connected in a similar way to the Dynamator D terminal behind the dash panel (now Green).

My Austin seven wiring has now deviated from the original harness as I have added the following: 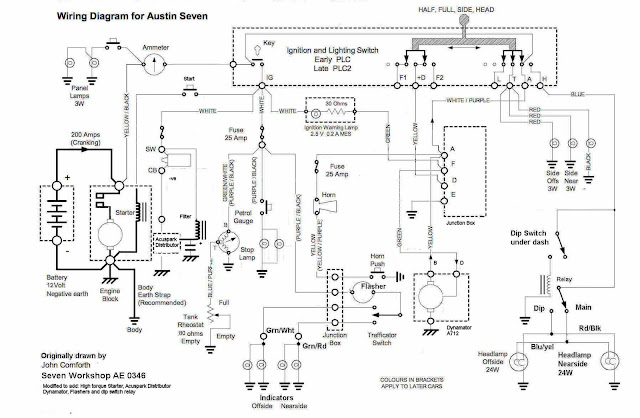 The results are spectacular, the race battery now copes with all the loads including headlights and water pump. The engine now self regulates the temperature well below boiling point (using a modern cored radiator).

Here is an Index page for the build﻿


Posted by theprisioner at 07:42 No comments:

A7 Tonneau Cover (Not Quite)

Decided if I want to event the car or travel any distance on a trailer then it needs a cockpit cover to keep the rain out. 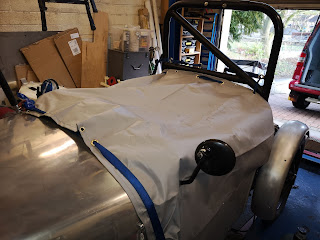 The truth is I have just ordered a set of custom cushions for the alloy bucket seats so there was nothing left in the budget for a Tonneau, perhaps next year. However I found this cover lying about the workshop, it is a trailer cover but is too small for it so I now have a good use for it.

Here is an Index page for the build﻿
Posted by theprisioner at 08:49 No comments:

Despite there being nothing published in the last two years plenty has been going on but nothing finished till now. I lost interest in the documentation for a while.

In 2017 I competed in the Boness Hill Climb and took the car and passenger (Angus) over the Bealach na Ba (P/O West Coast 500, Applecross section). 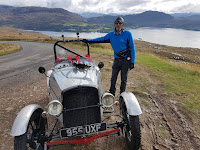 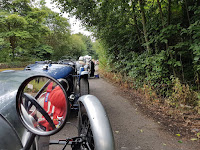 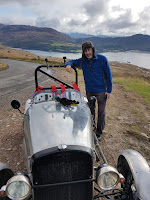 You could think that was job done, what next, the truth behind these appealing images was very different. The car was low in power for hill climbs, the brakes were non-existent, it was difficult to change gear up or down and the suspension was terrible on corners. The seats are uncomfortable for a long run like Applecross.


I had all but decided to sell the car in the autumn of 2017 especially after the returning from Applecross. However I met a chap called Paul Neil McLauchlan (Vintage and Classic Workshop) who talked me though a series of changes that could be done to the car to improve it. Another project was born. 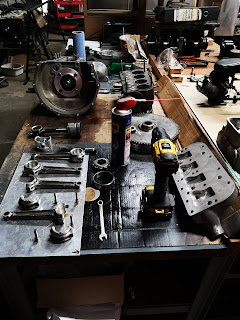 The engine was removed in autumn 2017 and the following work was done.


The gearbox was next

Moving on to the brakes 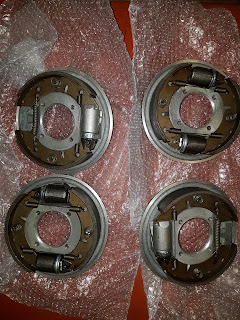 The hydraulic brake installation was the most difficult job I have ever done building cars. Do not attempt this job unless you are well prepared, have the correct skills and have access to another conversion as there is nothing documented. Although the parts were new and all were intended to produce the end result in an Austin Seven many parts had to be custom engineered to fit an Austin Seven.


It looks more or less like the car was in 2017 but I assure you it is a totally different beast. I have never invested so much time and effort into a car build with no visible evidence showing from outside. 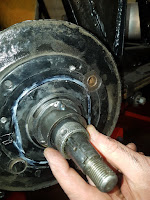 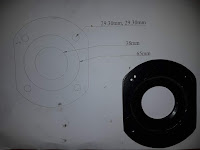 Special tooling had to be developed to cut the rear casting of the integral backplates to add the allow backplates.

A CAD drawing was produced and sent off to a plasma cutting service in Hillington near Glasgow the parts were then assembled using brazing technique.

A pedal box including balance bar was obtained from Rally Design, however this had to be mounted on the A7 chassis. Image shows cardboard model of mounting arrangement. Who needs CAD? 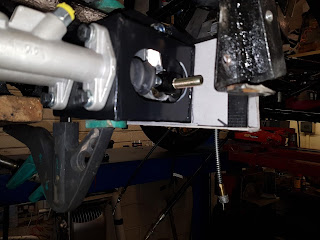 The handbrake on an Austin Seven is part of a substantial round shaft bar that links into mechanical brakes. As all that was now done away with another arrangement was needed. The handbrake was always too far away to actuate while strapped in so it needed moved closer. 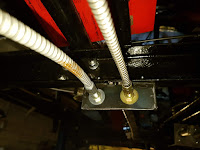 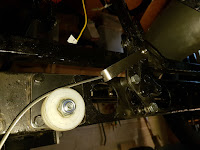 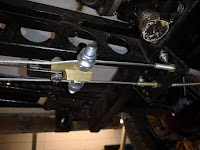 The original site was used for a bobbin pully that reverses the action of the cable the original brake leaver was modified with a clevis to connect to the cable.

The suspension was defective on two counts 1) the original Bowden independent suspension did not work well 2) The rear suspension needed a Panhard rod to maintain stability. 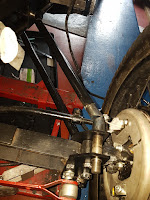 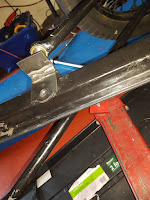 The above images show the fabrication of the front suspension the cardboard simulated the mudguard mounting changes. CAD came to the rescue again with a drawing remodeling the Bowden end plates to take the upper wishbone. The drawing was sent to a plasma cutting service. I needed all 4 plates to be made to a tight tolerance.

The rear suspension had a Panhard rod added. 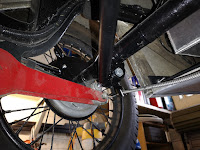 Here is an Index page for the build﻿

Posted by theprisioner at 02:42 No comments:

I decided to address the power issue on my Austin Seven, it does not have much but I suspected the distributor was responsible as the higher rev's the power was erratic.  I decided to look at the Lucas distributor. I took off the top plate to find one of the weight pivots was destroyed and effectively had no or at best random mechanical advance. 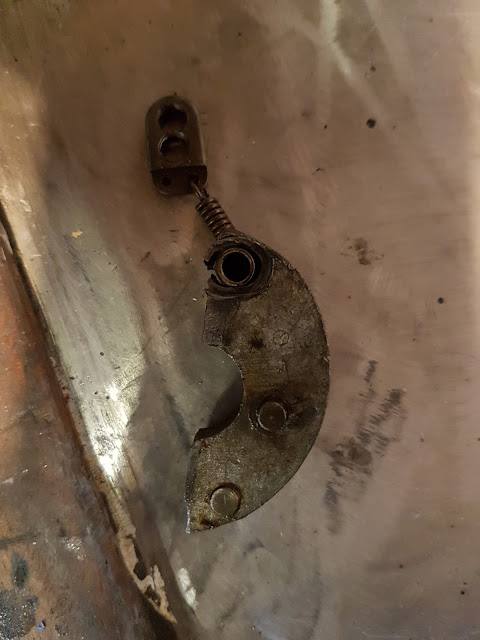 The simple answer I thought was a new electronic distributor. Asking around the paddock at various hill climb meetings I got mixed reviews of such a change. Some said it was good and others said they reverted to the old one with points because of timing/starting issues.

I decided to buy one at the Austin Seven Guildtown Rally (as it was on offer) and had it fitted at the show. I went on a run with the device but I was plagued with misfires and lack of power at higher revs. The dealer offered to change the unit and in fact he tried another unit which had exactly the same charicteristics. I was  fairly convinced it was due to the application in my car as numerous others had complete success, so I decided to purchase the unit on approval. 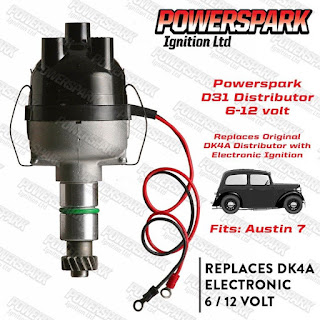 It is a nice looking part, I have taken it apart looking for the source of my problems and it all looks well designed and put together. I even tried using similar  advance springs to my original unit.  I put an Oscilloscope on the feed to the coil but I could not discern any abnormal behaviour in the waveforms. The Timing light when connected to the engine when running shows a random timing mark unsteady at any speed. The tick-over is rough. There is no appreciable mechanical slack in the drive to the distributor.

I had a eureka moment after competing at Forrestburn recently and decided the unit may be sensitive to noise from the generator/regulator. I have had problems in the past trying to put electronics in a car due to noise issues. In fact I had the same problem with my cooling pump timer. I decided to make a filter with a few bits lying about in my spares box. The theoretical cut-off frequency of the filter of this type is 1/(2*PI* SQRT(L*C)) in this case about 1.5KHz. It has a toroidal coil capable of 5A. The capacitor is an 12V electrolytic type so don't get it around the wrong way. 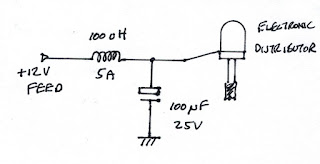 This completely cured the problems. These bits are readily available on either ebay or RS components.
My times on a hill climb can only improve. See you at Bo'ness revival.


Here is an Index page for the build﻿


Posted by theprisioner at 03:54 No comments:

Despite rebuilding the brakes from scratch the brakes are not that good and they have a annoying habit of binding. This can be dangerous on the road when wet as you suddenly go into a skid as one corner bites when they others are still free.

I originally made a jig for truing up the drums on the lathe unfortunately I made a schoolboy error when turning it and I managed to insert a runoff. This was due the fact I was having trouble machining it so I put the backplane blank on backwards to machine it. Transferring it around  frontwards introduced a runoff error. This inserted effectively an offset into the drum when trying to tru them up. The error was only a few thou but magnified by the drum diameters caused a real problem

I discovered the error modified the jig and retried the drums on the car. This has stopped the binding issue now completely.

﻿
Here is an Index page for the build﻿